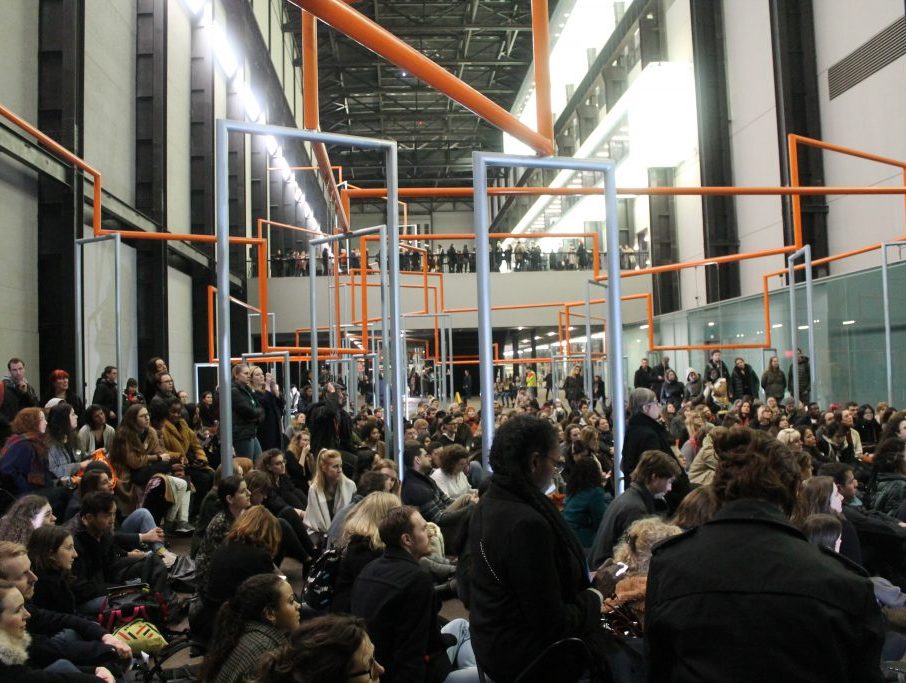 The title of this blog post derives from a quote over the tomb of Sir Christopher Wren in St Paul’s Cathedral. Hence my picture, this was taken on leaving Tate Modern after attending their February Uniqlo Late. As I crossed the so called ‘wobbly bridge’ at 11pm this view seemed to put Tate, London and all of it’s cultural context on view as the Thames passed below.

I have to say, It was a fantastic night and a great example how the AV discipline plays a big part in delivering an atmospheric events. The report below is written by our member Josa Taylor and is the first, of what I hope, will be exclusive content from Tate AV. Thank you Josa for writing this and taking the great pictures, and also, a big thanks to Dan Crompton, the Tate’s AV Manager for enabling this initiative.

Hosting thousands of visitors monthly, Uniqlo Late at Tate Modern has been a great success. We have people of all ages attending to enjoy the music, performances and discussions here at Tate Modern. The theme of this particular late was women in the arts, so the place was thriving with talks and we were surrounded by strong female characters. Some of the performances were programmed by gal-dem, the award-winning magazine written and produced by women and non-binary people of colour. It was an extremely popular event and we estimate 15-20 thousand visitors came throughout the evening. The TATE AV team worked throughout the day and night, all on facilitating some very interesting content. 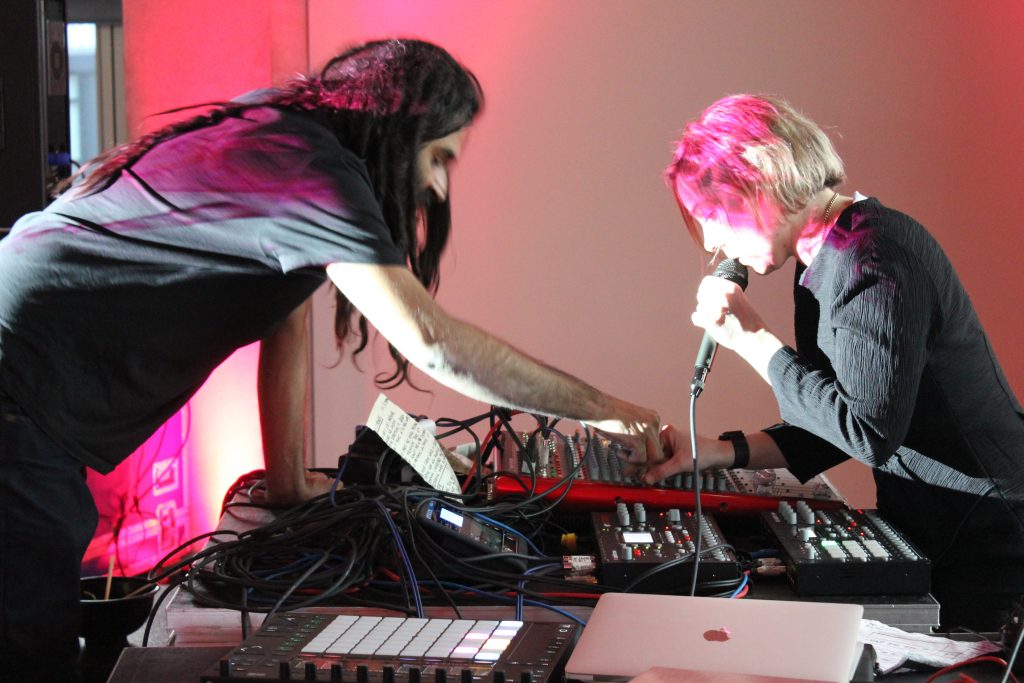 These events are a good example of the hardest and most challenging activities the AV team support, and is possibly the biggest team we build and amongst the largest scale events we run.

On the night, for the Tanks, we had a fairly low key set up. Gal-dem programmed four DJs to perform throughout the evening. These guys smashed it. We had a Pioneer & Technics DJ rig, with Meyer PA, a mix of in house systems and equipment hired from one of our PA partners, RNSS, some really great kit! The DJs had the room busy and buzzy all evening, the atmosphere was happy and exuberant and the sound was excellent. 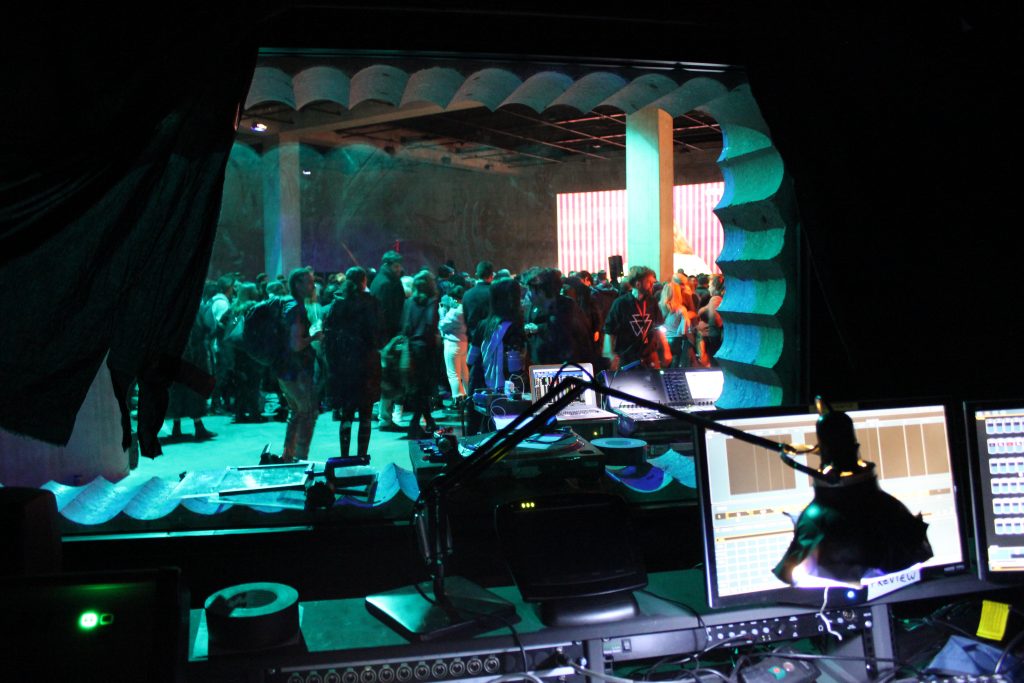 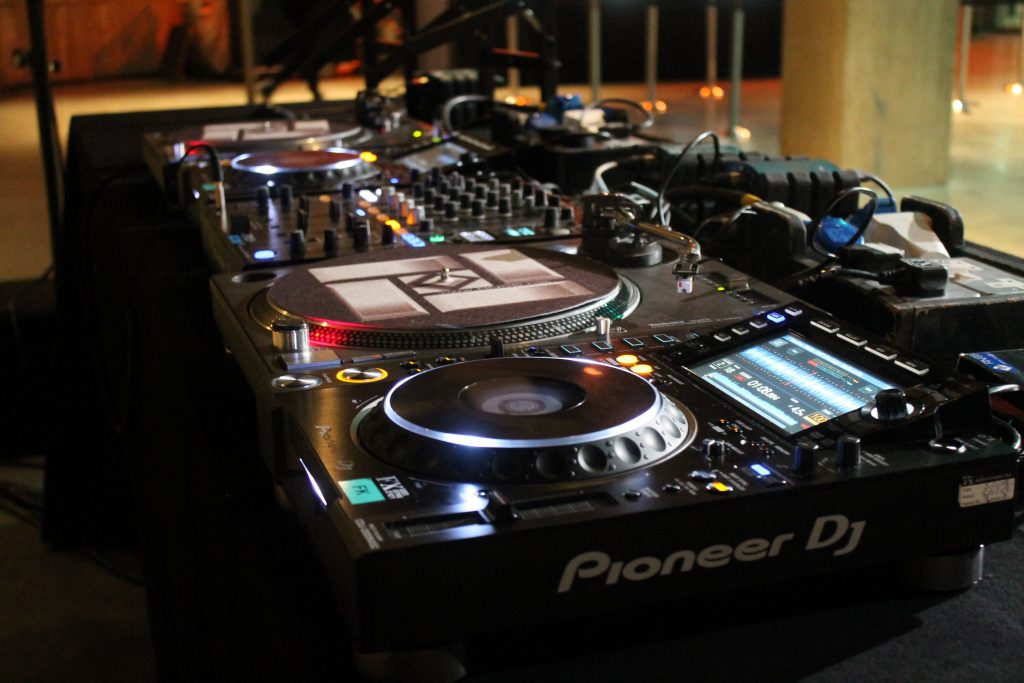 Part of the key to working with these artists is spending the time preparing and negotiating with them to plan the set up. We have to cater to the specific needs of the artist and what they need to be prepared for them before they arrive. For this night we had one DJ who was using a Spotify playlist for her set. This could cause problems as there’s always a risk when relying on content from the internet. Never robust enough for live gigs in our view. So, we had a local USB drive backup with music available just in case, so that we wouldn’t be short of music.

But we were not disappointed, as all the sets went to plan and the tanks were a dancing sea of happy music lovers.

Something that we love about these Lates are the innovative activations in different spaces. It’s probably the most interesting AV we do and each space is so unique with different demands. An ‘activation’ is a Tate term for when we bring a gallery to life with some form of activity, beyond the static display normally found there. These activations usually incorporate some form of AV or other. 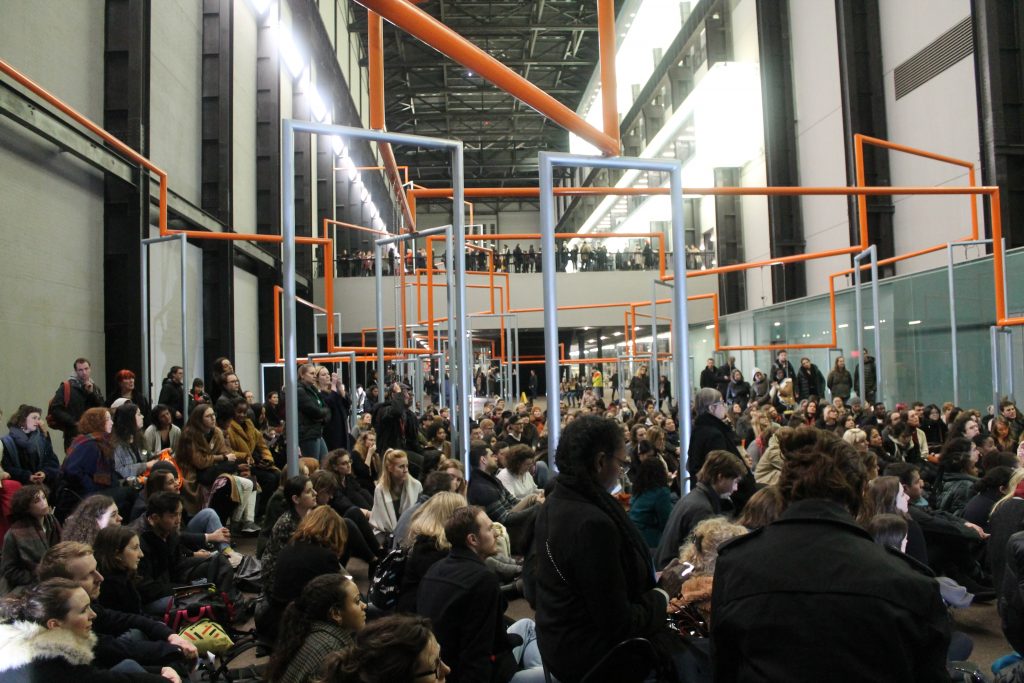 The Turbine Hall was a great example of this. We went much further this time (team members were setting up all the previous night) rigging the loudspeakers and getting them in just the right configuration. This was very challenging because the hall is so big it needs to be loud, but also avoid excessive natural reverb. We accomplished this by using sixteen Meyer MM4 & two Meyer UPJ loudspeakers with Galileo processing and a Yamaha QL1 mixer. Spaced at equal distances apart throughout the hall to secure good coverage for the whole space. These we used specifically for the Q&A with Frances Morris, direcTate Modern’s Director and Liv Little, gal-dem’s founder. They sat on the swings (Tate’s current Turbine Hall Hyundai commission, One Two Three Swing! By Superflex) in the Turbine Hall whilst having a discussion and chatting about their roles. 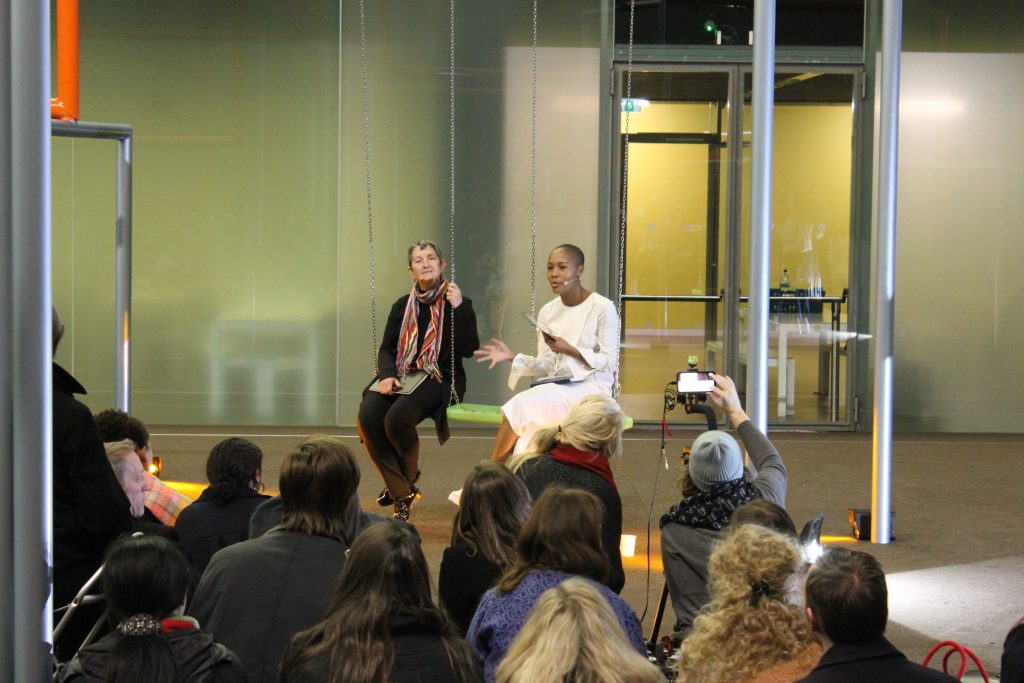 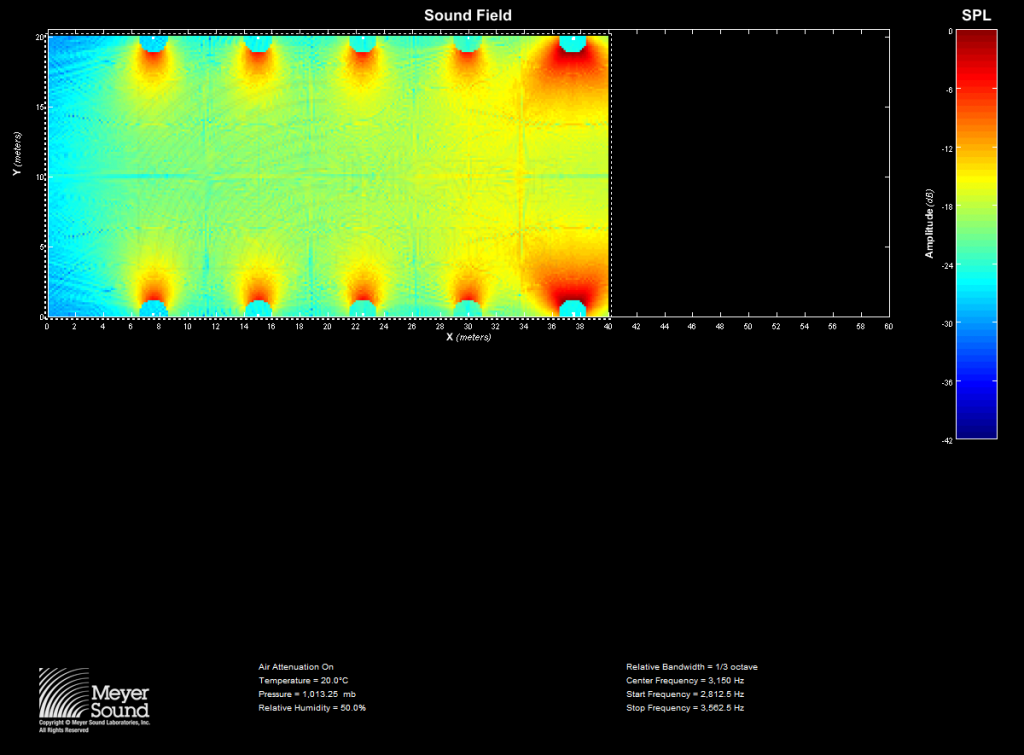 Tate’s digital team did a live stream of this via Facebook so anyone not here could view remotely. There were some issues with the connection of the interface to the PA system into the iPhone X used, as we had not been able to prepare the recording before the day, so RF hook up wasn’t easy.

But there was only a short delay for the guests, a small price to pay for the effect gained. We used DPA d mics and Shure radio transmitters, sending the feeds over RF instead of cables in the more inaccessible places.

This worked much better for such a large space, but there is always the risk of the RF picking up interference. There are also risks when using cables, as they can be damaged or unplugged, but luckily we didn’t come across any of these issues. Some of this equipment was set up the day before, but other elements were not, some last minute improvisation was needed. This is one of the things we relish at Tate AV, getting various systems in place quickly to keep the ball rolling. 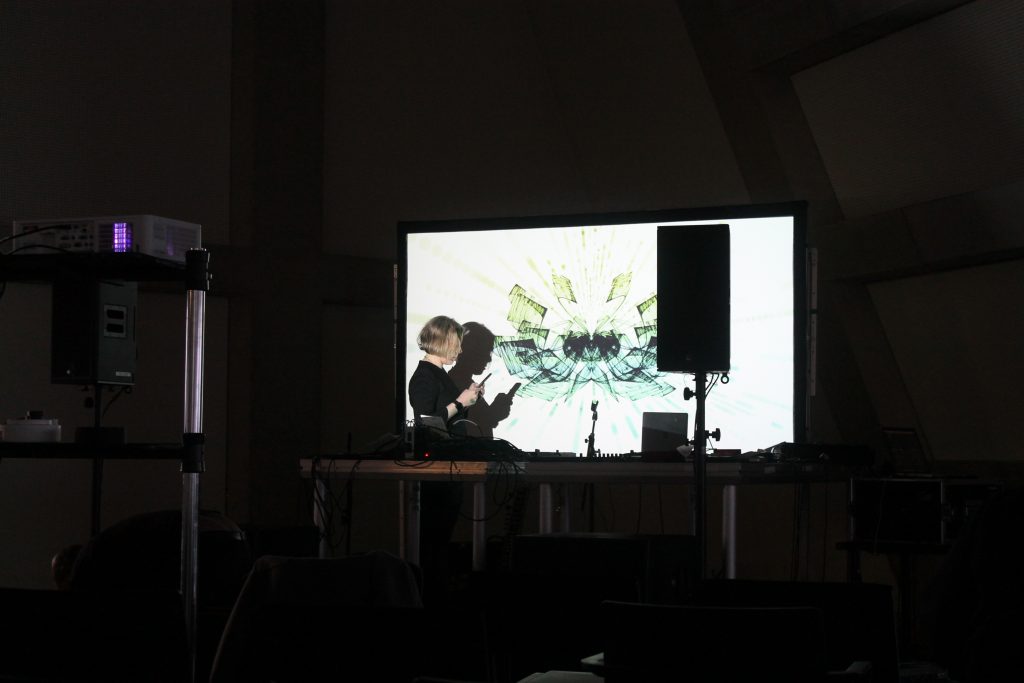 The Tate Exchange space is a vibrant hub of activity on the night. The room was filled with activations to get people involved and create their own art work, themed for the event. This is a great way to entice visitors, as they need to be drawn in, we aim to be inviting. We set up coloured lights along with screens showing the visuals to create an atmosphere and inspire people to look around the environment.

Tate Exchange, used in this way, encourages people to explore their artistic flair and we supply ways to more intimately communicate using sound and vision. For example, with headphones attached to a big screen, people can use without too much distraction from the surrounding audio content. It’s all about participation and engagement, especially at these big events.

Throughout the week Tate Exchange is occupied, in this case by Represent! who were running the space. Equipment is used throughout the week but on Friday we ramped it up. Described by Dan (Tate AV Service Manager) as ‘an eternal shuffle’ we alter the space and equipment to fit the frenetic activities throughout the weeks. Shifting elements to fit each event. Dan describes our equipment at Tate like Lego. Taking the building blocks and rearranging them regularly, moving stuff around and setting it all up in different places for different uses. Like builders of sound and vision.

On level 6 we had a traditional stage setup in terms of the use of space. The ‘WITCiH Salon’ is a platform hosted by musician, artist and co-founder Bishi. She was performing along with three other female talents. We had to meticulously plan this one in advance as these guys have special instruments and ideas about their sets. Bishi uses a sitar that we needed to D.I. into the PA, along with her voice, RC505, Ableton Push and Scarlett 6i6 combining a highly traditional sound with cutting edge contemporary equipment is not easy of course. The key was to engage our friends and colleagues from Surplus Sound who have a special sensitivity and understanding of arts AV, to help run the show.

WITCiH had planned projections for their backdrop which we needed to line up carefully in advance using our Christie projectors. This was a popular event, was packed out and the sound worked amazingly well for the audience, spreading evenly through the unusual space. Big sounds going on; 2 Meyer UPJ powered speakers with 6 of Surplus Sound’s HK Audio Premium PR-O 210 subs, so the music could travel well. The stage set up was altered slightly for each performer. During the sound check we worked out how to do each switch quickly and efficiently.

This space on Level 6 is a good illustration of how the team have to mix and match hire equipment and artist’s equipment with our own. In all, an ideal example of cultural AV we feel.

Why not come along and check out our next Uniqlo Late at Tate Modern? As your Chairman said when he came along ‘it’s really kicking here’.

And so it was, Kicking!