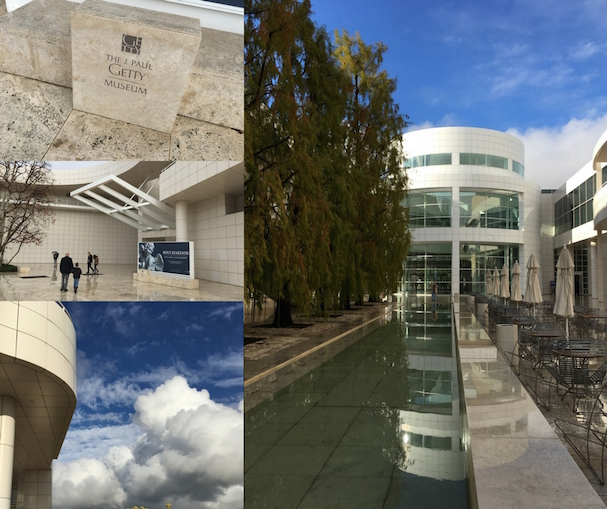 The Getty Center, an amazing architectural statement, designed by Richard Meier, sits atop a hill with a commanding view of LA. In the distance, the Pacific ocean, glimmers through a gap in the clouds.

Have I mentioned the rain?

There was much rain. As I set out on my journey the weather was atypical, rainy and overcast. More in tune with London than LA. But after several years of drought no one was complaining.

However, Interstate 105 and all US freeways, are a challenge (read scary), and that’s without the rain. Check out Steve Martin’s film L.A. Story and the freeway scene. You’ll get the idea.

Happily I was driven there by my friend Nick Night, digital media maestro and formerly one of the world’s top illusion acts, with his wife Kinga. (A story for another time). Anyway, all good. As, after all these years, I have managed to escape the driving treadmill. More of a passenger me. But for Los Angelinos it’s a given, everyone drives.

Ok don’t send me the names of the six people who don’t.

Anyway, anyway….while on my adventures in LA I thought I’d fly the flag for AVCF and arrange a visit to the AV technical team who run things at Getty. Many of my academic colleagues from the British Museum had worked on projects there and spoke very highly of it. Having sent a little heads up email a week before (I know how busy museum AV delivery can get) I got a very nice invitation from Steph Dirden, the man tasked with running AV for the Getty, and was invited to pay a visit.

Steph had very kindly supplied us with access to parking ‘up on the hill’ so no tourist monorail ride from sea level for us. We were met and taken to one of the main orientation theatres where they show a small film to put the building and it’s history in context. This is run from pre recorded content fed to a projection system via AMX, updates are serviced by Steph or one of his team (he has 9 people to serve both the Getty Museum and the Getty Villa which is in Pacific Palisades, Malibu). Like my previous existence at the Museum Steph has been a long time staff member at Getty, 34 years. He started at the Getty Villa in 1983 and saw the construction of the Getty Centre campus from it’s inception in 1984. He was appointed by the trust to run AV at the museum in 1995. So he has good context on the way things have evolved. Steph then took me to see their main theatre, the Harold M Williams Auditorium, which seats around 350 people and is named after the man who steered the Getty Trust through implementation of this this site. The trust oversee all aspects of programming for the museum.

Steph introduced me to some of his colleagues; Bill King, Mike Easley and Marvin Jones. They use the title of audio visual specialists, which I think has a nice ring to it. For those of you who know my views I think the titles we get for our roles can inform the perception of users. These guys are indeed specialists in either audio, projection or lighting but obviously can turn their hands to many different tasks. I felt right at home on the flight deck with names like Christie, Yamaha and Crestron, all amongst the familiar racking and control equipment you’d find in any control area. 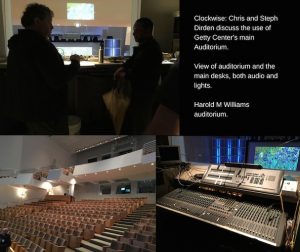 They made me feel very welcome and I told them what AVCF was about, how it began, and where I hope my stewardship will lead it. At present, I explained, we are a growing community, a knowledge exchange and going forward will have some influence within our discipline. They got it. As you can imagine a group of techs chewing the fat in a projection room is a very familiar experience and I told them this could have been one of our Cultural Forum get togethers back in Blighty. I was happy to invite them, on your behalf, to link with our merry band, and have extended them all an invitation should they ever come through the UK. So our first international members! Welcome chaps.

In fact I hope we can arrange a remote VC link at one of our events, so we can say hi to each other and have a little Q&A. It was a pleasure to get an insight on how they ran one of the world’s top cultural venues.

It was still raining when I surfaced, but they had thought of that and had a complimentary Getty umbrella on hand. 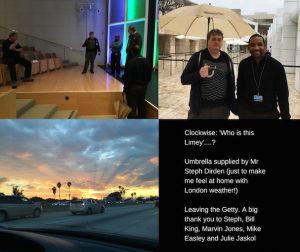