Being the chair of our august body brings many responses and requests. One such was the kind offer of a colleague, Mike Piddock, who runs a company specialising in ARS he offered to write a small outline for us, from his viewpoint, of how this has become part of what we deal with more and more at the coalface.

I know some of you already adopt your own solutions or suppliers for this function. But I think Mike has encapsulated very usefully the history and impact it can have on our events. Look forward to any feedback you might have.

Check out his site.

Over to you Mike. 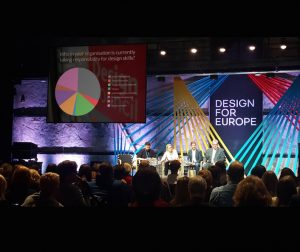 The use of an audience response system at a corporate event is nothing new, and the presence of an “ARS Operator” behind the tech desk is an increasingly common sight, so I thought it would be interesting to explore why this is, what’s changing, and what that means for AV companies and their technicians.

Audience Response Systems, while originally developed in the 1960s, gained popularity through education establishments, but really impacted the corporate world when firms with large numbers of shareholders realised they were far more effective way of collecting votes at AGMs.

So their original purpose was simply information collection, rather than ‘audience engagement’, and hardware was developed in order to perform this simple process. With a limited number of options (A to D, for example), a dedicated Local Area Network (LAN), and a specialist operator, they did the job they were meant to.

Then, once more creative minds started thinking about more interesting ways that delegate response could be used (no doubt influenced by the success of Who Wants to be a Millionaire and its ‘Ask the Audience’ section) the hardware and corresponding software began to evolve.

However, usage remained relatively niche compared to the huge volume of corporate events taking place. The cost of shipping hundreds of handsets, installing a LAN, paying for dedicated ARS technicians, and the fuss of distributing and collecting back the devices, meant it remained a fairly specialist pursuit.

The impact of smartphones and iPads

Getting closer to present day, the introduction of iPhones and iPads and increasing expectations around what smart devices could do meant creative event planners started pushing the boundaries. They wanted an experience more like the consumer apps that were being launched with great fanfare, with much richer forms of engagement.

Specialist apps were developed, and early event-tech pioneers pre-loaded their software onto hired devices and continued to provide network hardware to support this. Not least, because native apps took an age to download, and venue Wi-Fi was still not up to scratch, so everything needed to be a lot more controlled. Only the very largest clients, or those with the deepest pockets, could afford the luxury of these solutions, and again the providers took full control of their complex ‘black-box’ software, leaving AV providers to take a back seat.

The current ‘third wave’ of innovation has been fuelled by the continued rising expectations of clients seeking better audience engagement, but has only been made possible by three technical advancements. These have allowed new operators, including my company Glisser, a platform to take things to the next level.

•  First, smartphone (or smart device) ownership has neared 100% in many countries. Users are familiar with them, and so the need to hire in iPads or use clickers (and the associated costs) has dramatically reduced.

•  Secondly, venue Wi-Fi, in the most part, or 4G/LTE has improved sufficiently to enable most event locations to support the continuous flow of data between audience devices and a central control system. This has provided a network infrastructure that doesn’t need the long and complex set up of a LAN. Having personally operated our solution at numerous events over the last two years, I’ve always felt a little sheepish to have simply disconnected my laptop and been ready to go home barely minutes after the last speaker has stepped off stage, leaving you guys to pack up boxes and boxes of kit.

•  Finally, as with much of the start-up tech scene, it is cloud infrastructure that has enabled an influx of innovative solutions, from fast moving, smaller companies, that are really tuned into the creative demands of clients, rather than building technology for technology’s sake.

All of this has combined to shift audience engagement, and the audience response systems powering it, up a gear or five. Now integrated live polling is commonplace, and digital Q&A feeds are reducing the need for roving mics after every presentation (many of us are thankful for the brevity it encourages from audience questions…) Taking it a step further, instant slide-sharing is becoming a powerful way of using every screen in the room, and creating opportunities for creative, interactive sessions, and hybrid live/virtual meetings across multiple locations.

What this means for AV technicians

This combination of factors – sophisticated client needs, innovative start-ups and crucial technical advances – has meant that audience response is now far more mainstream and increasingly impacting what has traditionally been the AV technician’s domain.

Generalist event apps have, by and large, stayed clear of the tech desk. They’re downloaded by attendees, and someone (from the client or app company) is managing things from behind the scenes. However, audience participation software (whether through Glisser, our competitors, or embedded within event apps) does cross over into AV since it invariably requires content to be displayed on the main screen(s).

That means that the ARS software needs to have been designed with the role of the AV tech in mind, it needs to fit around the way that you work and the systems that you use. At the same time, it’s important that AV engineers begin to familiarise themselves with the systems available, and how they combine with what you are already doing to ensure a great client experience – or even (whisper it…) make your life easier.

At Glisser, we’ve put a lot of thought into this, and been working with AV professionals to refine our solution. We’ve seen the most challenging presenter demands, and the way they are expertly handled and seamlessly plugged into an already stressed event, by you guys. And we’ve tried to design a solution that helps you do the things you need to do, including:

•  Polling integrated straight into the slides in the right place, with the results again revealed with a quick key, rather than the constant to-and-fro from one system to another

• Tools to combine multiple presentations into a single event window, laid out like a regular calendar, to avoid the single slide deck for the whole day

•   And last, but not least, simplicity to upload and replace presentations and slides that arrive and change at the last minute – as they always seem to do…

We believe ours is a solution that the AV community can understand easily, and continue to contribute to its development. While we’re on site for 50% of our clients, we’re all about building the best product for everyone – not least the original ‘event-tech’ experts behind the AV desk. Please take a look at what we are doing, tell us how we can improve, and help us make sure our technology works for you.

Mike Piddock is the Founder of Glisser, event technology to engage audiences and gather data at live events.